So I was complimenting the UDK for ease of use in my last post, well this is what I managed to do in a couple of hours (that was spread out over 2 or 3 days): 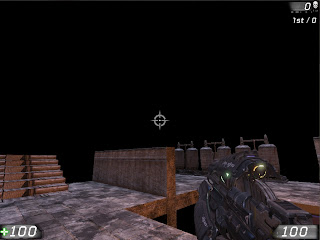 The UDK is well worth checking out.

Posted by WaltherPPK at 20:16 No comments:

so things have been pretty crazy around here. As I've said before, this is all done in spare time and, unfortunately, spare time is something that has disappeared as of late (though an addiction to Assassin's Creed 2 has not helped). Anyway, I have left XNA on the back burner as I have been looking at version 3 of the Unreal Development Kit (UDK). I must say, it is a pretty slick tool. The interfaces have changed A LOT since I last looked at the engine and the asset browser is a bit confusing at first, but you soon get used to it. There are a lot of resources on the UDK site (such as video tutorials) and they are all free. The engine is also free as long as you are not developing for commercial use.

Anyway, so why did I start looking at UDK? I have been asked to prepare a little something about AI for a presentation at the Calgary XNA Users Group. The presentation is based on a thesis I did a while ago on giving NPCs the ability to determine their own use of cover in environments. The original demo of this was completed in C++ in a custom 2D engine that used DirectX8. Anyway, the art work was garbage as I did it myself so I was hoping to do something that really shows off the potential for the technology as well as looks good and was in C++ (though the UDK runs Unreal Script, but at least it is OO) as it would be quicker than developing a 3D engine in XNA. So the prototype is starting to get somewhere as far as the level design goes, so I'm going to start some coding on it tomorrow. Hopefully I can put some screen shots up here soon so you can see it. I may even put up a copy of the presentation.

That's all for now, so take it easy.

Martin
Posted by WaltherPPK at 22:42 No comments: